Kevin Green — 13 August 2020
The Leader range from Jeanneau continues to sell well because they are versatile craft, which makes the entry level 30 an ideal starter boat.

Comprising of five models, going from 30–46-foot, there's plenty to choose from in Jeanneau's well proven Leader range and the 2019/20 models offer outboard motors which further enhance the versatility of this multi-purpose lineup. Removing the heavier inboard engines, which are still an option, saves both weight and space, and requires less maintenance. Add to this the fact that the Leader 30 can sleep up to four — ideal for mum, dad and the kids — and you have a compelling proposition at a reasonable price; the latter because of the vast economies-of-scale from the Beneteau Group. To investigate further, I took an early model for a blast off the French coast.

Aesthetics are an emotive subject, but to me the Leader 30, sitting alongside the 33, looked decidedly more squat, as high topsides were required to fit in the relatively large interior below decks. Like any shallow drafted sports boat, it has to be used in moderate conditions (it's rated CE 'B' for limited offshore use). Versatility is at the heart of this range, whose hulls come from the prolific Michael Peters stable. The cabriolet style deck layout — called Open Top (its larger siblings also offer the more traditional closed cabin Sport Top version as well) — makes it a spacious day boat for watersports, yet it still has good accommodation.

Stepping aboard is done via the narrow fibreglass platform that surrounds the twin 200hp Yamaha outboards, so I had to watch my steps in the bouncy waters of Cannes harbour, before I gingerly made my way into the cockpit through a starboard transom door. Ideally I'd option the teak cladding on this platform, both for grip and comfort. 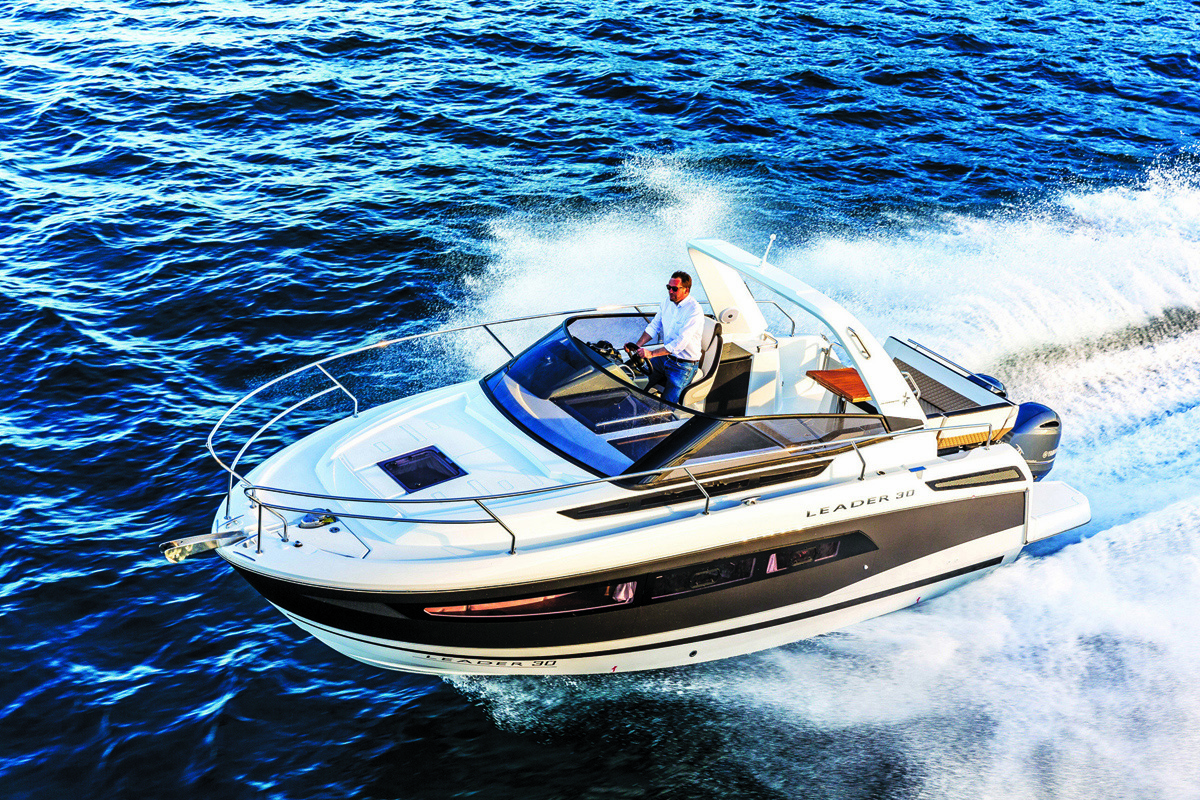 Inside, the cockpit ergonomics are similar to the larger siblings, all well designed by the experienced Italian Garroni company. That word again, versatility, is scribbled in my notebook before I lift the transom bench to transform it into a double sunpad, effectively increasing the usable deck space at the same time. Below it, in the hull, is a large usable space where the inboard engines would have been, which is ideal for stashing skis and other watersports paraphernalia. Another locker is below the table, about the size of a four man liferaft.

The cockpit layout has an L-shaped bench on port, surrounding a fold-out teak table. At its front is two-way folding seat alongside the steering console. Opposite the table is small wetbar. On our review boat was storage and sink only, but there's a fridge option here. However, just remember that only outboard alternators give electricity unless a heavy generator is fitted, so probably best to stick to the single larger fridge below decks if performance is a priority.

A bucket seat comfortably seats the skipper on the starboard side of the Leader 30, just under the windshield. Centre stage on the console layout is the Raymarine Hybrid Touch screen with small (essential) compass above it. Clustered on each side are chunky buttons and a Yamaha engine screen. Throttle controls for the twin 200hp outboards sit on the right side, beside the Quick joystick for the bow thruster. This functional area is nicely finished off with an adjustable steering wheel and drinks holder beside it.

The deck layout includes the targa overhead, that had only a VHF aerial mounted on our review boat, but could have a radar and other electronics. For our abundant sunshine in Australia, it could also be a support strut for a bimini when at anchor. Also, the targa is an important handhold for making your way forward along the narrow sidedecks to the foredeck where a double sunpad clips on and the wide bow lends it sufficient space, safely surrounded by a stainless safety rail.

Anchoring is done effectively via a vertical Lewmar electric windlass with manual override and bow roller. Alongside is a reasonably deep chain locker. Mooring is also well taken care of with deck cleats all round and twin ones aft.

Sliding back the tinted acrylic main hatch that adjoins the steering console reveals the interior of the Leader 30. There are two cabins with compact galley and bathroom between. Clever use of space is again evident, with notable features such as the transformation of the couch in the owner's berth to make the forepeak area either a lounge/dinette or a spacious bed.

Other good points are plenty of natural light with ventilation, thanks to a large opening skylight, and enough volume to give ample headroom, while the slim rectangle portlights stylishly enhance light and views. Storage includes cupboards and under-bed space (shared by the bow thruster), more than enough for those long weekends. Clever design from Garroni is again evident, with the inclusion of a sliding door to shut off this space.

Weekend dining should also be enjoyable in the well equipped galley which has a two burner cooker and 65 litre fridge, with worktop. A small sink nearby completes the layout, with the optional hot water system available. For longer voyages a small generator could be fitted to power an air conditioner, computers, television and so on.  Overhead, white lacquered lockers and drawers below the sink ensure enough storage while underfoot there are bilge baskets to keep the wine at a stable temperate. Opposite on starboard is the bathroom, with manual toilet and sizeable sink. Given the shower could operate here and soak everything, I'd change the wooden facia.

Midships is where the second cabin nestles under the cockpit and thanks to those towering topsides there's generous volume for a 30 footer, to avoid claustrophobia. The beam also allows good space for the athwartships double bed with natural light — thanks to opening hatches and portlights. Also impressive is the inclusion of a small couch on the port side bulkhead plus a hanging locker.

The overall finish is precise and functional, reflecting the mass production quality control that Jeanneau does so well; the CNC shaped joinery has been assembled without rough edges or ill-fitting cabinetry.

The versatility of outboards on the smaller Leader models reflects the market trend towards this type of propulsion. The hulls of the Leader 30 and 33 were originally built for stern drives, with the choice of petrol Mercruisers or diesel Volvos, with two power options in both. However, the 2019/20 Leader 30 and 33 can have twin Yamaha outboards. Our review boat came with F200 four cylinder Yamahas.

The reasons to consider outboards include: freeing up inboard space, better power-to-weight ratio, easier maintenance and future upgrades. Fuel efficiencies are another plus that is often cited, as is the ability to lift the drive clear of the water, making them ideal for beaching. On the other hand, arguably greater reliably is cited by inboard manufacturers and of course greater protection from the elements. Also, the inboard version comes with a full size swim platform.

Within the former engine compartment of the Leader 30 are the main systems — hydraulics for the engine controls and various electrical connections sufficiently high up on the bulkheads to avoid water damage, but not so the starting battery. A second battery for house systems can go here as well, along with ample space for 3.5kVA generator and water toys. The other essential is the 200 litre fuel tank that runs athwartships here.

The hull layup on the Leader is fairly traditional, hand laid sandwich fibreglass/balsa core, which looked well finished and faired. The underwater profile is a conventional modified Vee hull with a waterline chine plus strakes to reduce spray and aid directional stability. Deadrise looks fairly modest (no figure given) and the aft sections are flat to promote planing.

If you've got flaunt it, as the saying goes on the French Riviera, where some of the world's richest enjoy boating. You can join them, at a fraction of the cost on the Leader 30, and its cabriolet styling will ensure you get noticed. Doing so for an afternoon was the extent of my indulgence on the Riviera but it was worth it, thanks to the sporty feel of the Leader 30 that reminded me of riding my motorbike in the hills above the bay, such was the feel of wind in my hair and the responsive ride of this Michael Peters designed hull.

Also, a big thank-you to the power offered by the purring Yamahas that had both long legs and torque. Yes, the inboard diesels could arguably get you further, as the petrol Yamies have a range of about 100 miles at a fast cruising speed of 26 knots, but the overall power delivery felt lively. Handling was also predictable, with enough obvious Vee in the hull forefoot to drive me, rather than slide me, around as I pushed harder in the medium chop of Cannes Bay. To increase the wind in my hair I pushed the throttles down further and tweaked the tabs to reach an impressive top speed of 33 knots, with the engines roaring (rather than screaming) at 5,900rpm. Returning to the quay, slow handling was tested by my reversing into the berth, done with occasional tweaks on the bow thruster but mostly with the smooth power delivery of the Yamaha propellers. No dramas and lots of fun, which makes the Leader 30 an ideal first buy.