John Ford — 9 April 2020
Don't be alarmed by the name, the Flipper 900ST has a strong Nordic heritage and ample servings of Scandinavian style

Try as hard as we might, we couldn’t get the Flipper 900ST to live up to its name, but I’m sure that will be reassuring to potential buyers because this Scandinavian sportsboat proved itself safe and stable right through to its 40kt potential.

You have to give it to those Finns though — calling a boat a Flipper shows there’s a humorous facet to what some might see as a national frozen-on austerity.

Those familiar with ‘60s television may have linked the name to the eponymous problem-solving dolphin, and that’s in fact the inspiration — early Flippers even had a dolphin as part of the logo. 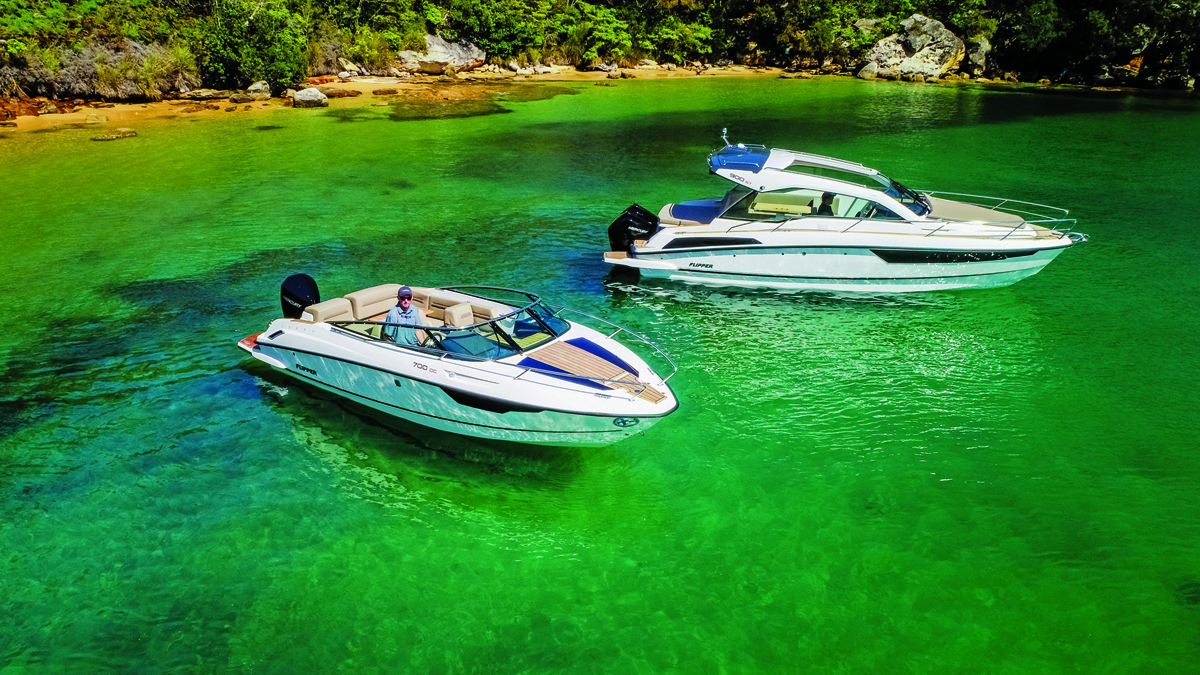 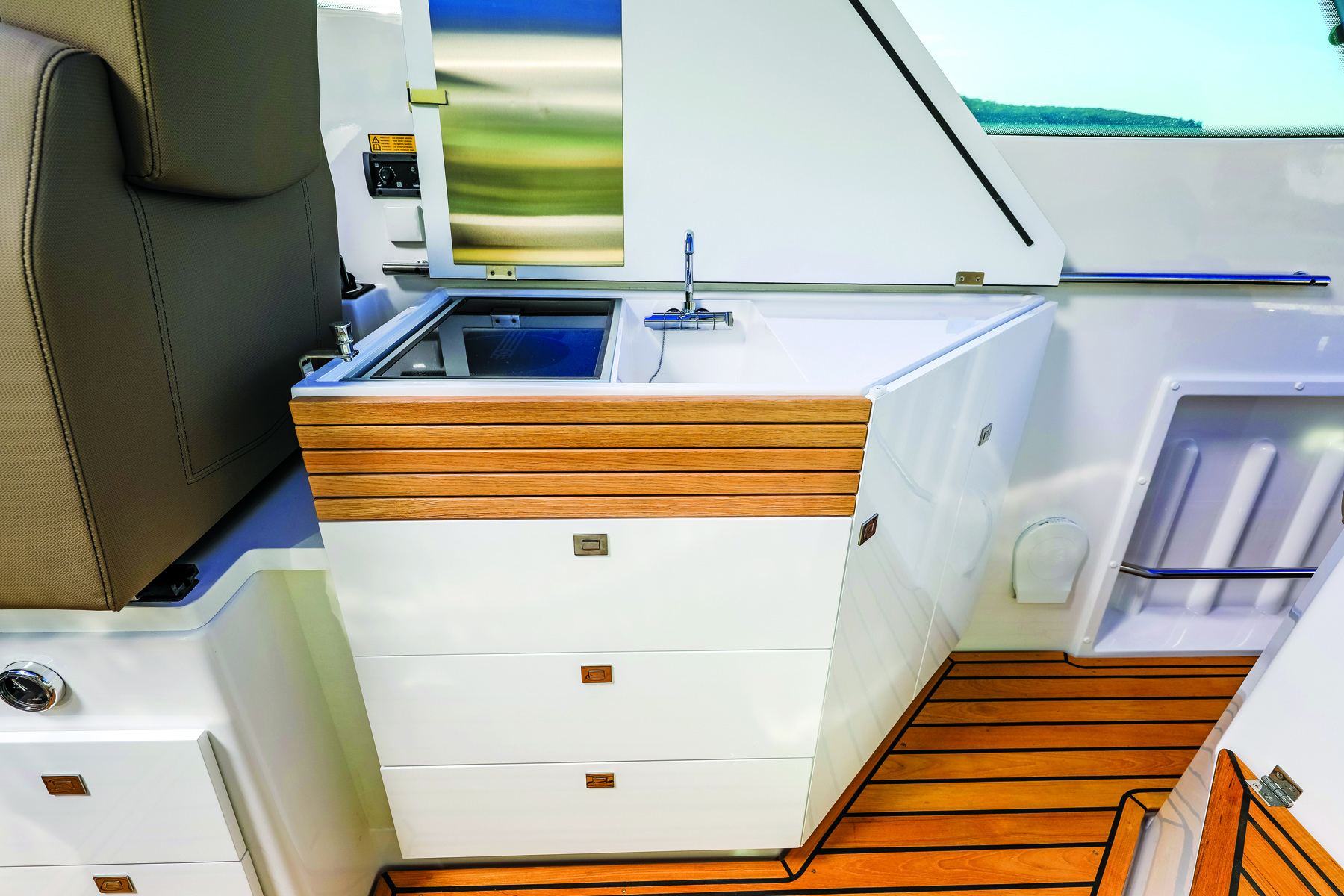 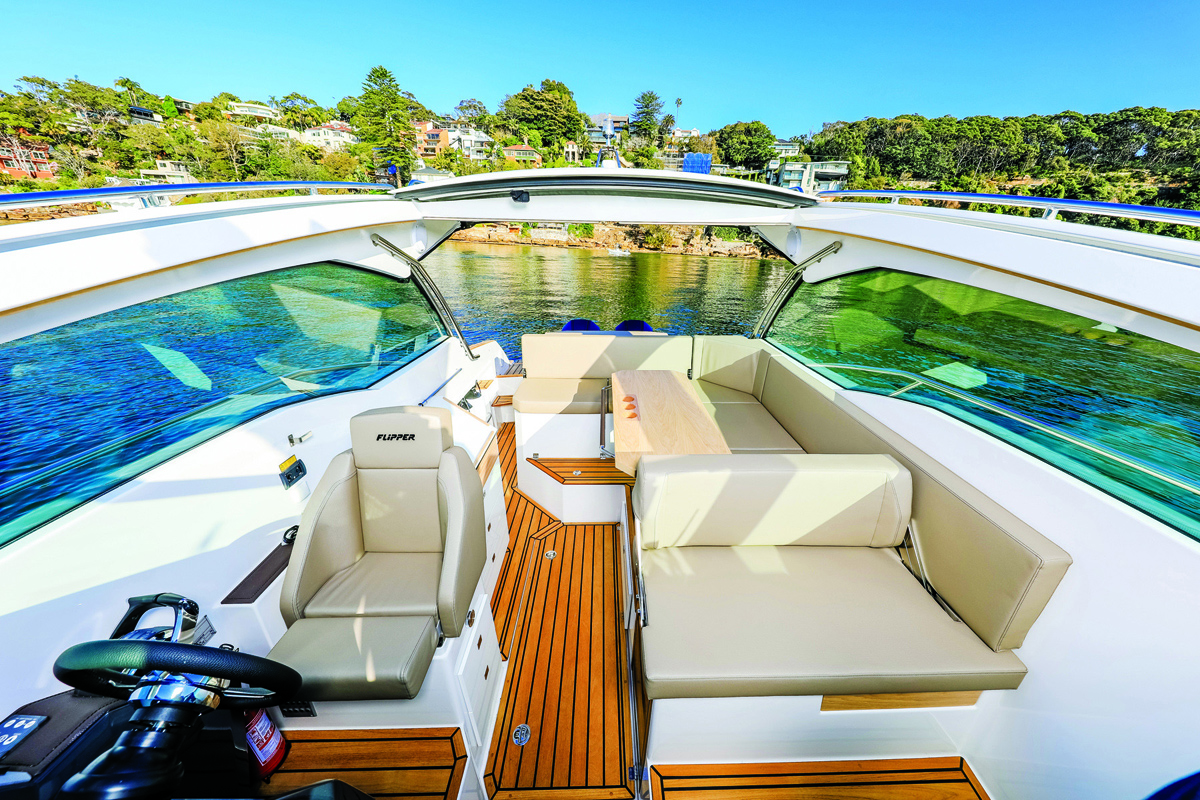 For readers unfamiliar with the brand, Flipper has been in production in Finland for half a century. Together with sister brands Bella, Falcon Aluminium Boats and Aquador, they form the larger Bella-Veneet organisation, employing more than 150 workers. Although bought out by Swedish company Nimbus Boats in 2018, production still takes place at Kuopio in Central Finland.

Like many brands, Flipper began when the fibreglass revolution hit boatbuilding in the 60s, and early designs grew from the principals of aeronautical design. So successful were some of these early models that the 1967 Lill Flipper, a 3.8m cat, is still in production in Sweden using the original moulds. As the company progressed, more sophisticated hull shapes took over, but racing and speed formed part of the marketing mix.

Flipper’s long-term relationship with the Brunswick Corporation means boats are rigged for and supplied locally with Mercury power plants. Flipper found its way to our shores when Dan Hanomis from Euronautica searched the world for a dynamic range of boats to suit local conditions. He struck a deal to import the brand and markets them in Sydney in conjunction with Chapman Marine.

The 900ST is the largest in the Flipper range and its Sports Top layout offers a year-round and all-weather versatility, as might be expected given its Scandinavian heritage. The opening roof of a hardtop and a rear cabin under a wide sunpad make an unusual but practical combination. While this practicality could have looked awkward, the Flipper’s neat, flowing lines accentuate a sporty persona.

How sporty is it? Well, our review version came with twin 200hp Mercury engines, but in a mark of supreme confidence in the hull’s ability, you can option up to twin 300hp V8s for performance that would be sensational.

It’s no coincidence that impressive performance is a feature of the current Flipper range. As far back as 1983 their flagship 30’ Flying Flipper was capable of 60kt with twin 200hp inboards, while boasting cruising features of a galley and overnight accommodation.

A lot has changed since then, and today’s Flipper is a result of a complete range revamp a few years back under the direction of industrial designer and naval architect Espen Throrup. His task was to deliver an upmarket range with quality finishes and immediate appeal for the time-hungry. It’s a familiar theme — today’s boat buyer wants a model that’s ready to go and easy to live with.

It has to also be visually appealing and, in that regard, the Flipper is a winner. An unusual square bow recedes to a chine line and a sharp and quickly raked entry at water level. The chines gain depth as they run to the transom and three running strakes each side of the keel assist with lift and tracking.

The topsides flow from the bow to a dramatically angled screen and hardtop that appears to hang in mid air but is supported imperceptibly at the rear on slim stainless-steel supports disguised behind narrow window frames. The side glass is a large single sheet imparting a beautiful simplicity from the outside and seamless horizons from within.

Swim platforms extend back either side of the engines and a recessed ladder to port makes it easy to board after a swim. I also noted a fresh water shower that has the option of a water heater. Access to the cockpit is via a portside walkway or a scramble over the rear sunpad and lounge to starboard. The sunpad has a backrest on struts and hovers over a rear cabin with entry door at the walkway.

I found access down into the cabin quite easy and once inside the twin single beds convert to a big double. They are comfortable and long enough for most to stretch out for a restful sleep, while a large widow gives an airy feeling. There are storage nooks and reading lights, plus reasonable head height when sitting. I like this second cabin arrangement because it gives more privacy and is easier to access than a central setup under the cockpit as is often found in smaller boats.

The hardtop extends over the central section of the cockpit but a full-width electric vinyl top opens back and disappears into the moulded section of the roof. Open, it would be fantastic on a spring day, and closed it protects from the full blast of summer.

An L-shaped lounge wraps across the transom and along the starboard side. It extends by flipping a twin navigator’s seat rearward to access seating for seven around a European Beech table with cup holders and a handy grab rail. The table sits on a substantial Norsap stainless steel support that lowers on an electric ram to add another sunlounge or occasional bed.

The sand coloured Silvertex upholstery has a modern square finish and blends well with the synthetic teak covering on most floor surfaces. To port is a versatile wet bar/galley with a moulded sink and a cover that extends for food preparation or serving. An enclosed-flame Wallas diesel stove includes a heat shield and is hooked up to its own 15L fuel tank. Meanwhile, under the galley are cupboards and drawers with soft-close openings.

A 49L Dometic fridge lives under the navigator seat and there’s an insulated icebox under the raised floor at the table. Also here is a monster storage hold that goes right down to the hull and is capable of storing water toys and any amount of provisioning.

Steps over the cabin bulkhead take you through an opening windscreen to the bow with its recessed stainless-steel anchor and Side Power windlass. Cushions clip in to make another sunlounge, and there’s more room on the teak deck to stretch out or sit while taking in the best view when under way.

A central sliding door leads to the forward cabin and a combination shower and head.

The Jabsco electric flushing toilet has a 47L holding tank with a gauge and while the ensuite isn’t huge, I found room enough to move, but I thought the shower seat over the toilet was somewhat cramped.

The cabin itself is roomy and airy with side windows and a large roof hatch. While styling might best be described as Scandinavian minimalist, there is nothing cheap or mass produced about it and it manages to impart a pleasant atmosphere that at the same time demands neatness from occupants.

As well as a padded seat and a small makeup table, there are hanging wardrobes and storage nooks everywhere and, like on most boats in this size, infill cushions convert the V- berth seating into a large double bed.

Our review boat’s willing performance is matched with a superbly arranged helm setup. The contoured seat slides and has a bolster and a timber footrest as well as a raised platform with enough height when standing to be above the roofline for all-round vision.

From rest, acceleration was smooth and swift, and, with little bow lift, the efficient hull was planing at just on 10kt and 2500rpm. Mid range acceleration was just as impressive. At 25kt I planted the throttle and there was a burst of speed that hurtled us to 35kt before eventually reaching our 40kt maximum at 5600rpm — perhaps as the engines bed in there’s the potential for even more.

Handling is nimble and predictable, and even in fast, full-power turns there was no instability or jarring over waves and no nasty rattles or vibrations across the rev range.

Given the Flipper’s cold climate birthplace, it suits local conditions really well. Priced at $335,000, the 900ST has a lot to offer and would make a very desirable cruiser for couple or families. The innovative cabin layout adds to the appeal and the storage capacity is amazing considering its compact size. Both newcomers and experienced hands should appreciate the crisp styling and spritely but forgiving performance.

In the past, owning a medium size boat could present problems with mooring or storage. But facilities like the Sydney Boathouse, adjacent to Chapman Marine, remove many of the reservations. Storage is under cover and a phone call is all it takes for your vessel to be launched with fuel, ready to go. And when you are done, all you need to do is step off and head home, leaving the washing and restacking to the professionals.