Axopar first hit the water in 2015 with the 28, which amazed with a striking style and performance in keeping with its radical looks. When the Trade-a-Boat crew got our hands on one in Sydney Harbour it was so impressive that we all wanted to take it home.

A boating public hungry for something different quickly seized on the refined Finnish style and Axopar hit all targets with something exciting and exclusive. The looks were different, as was the performance, and the price tag retained exclusivity for well-off punters with a mooring at their harbourside real estate. Axopar went out on a limb with the concept, but it has paid off in spades. Production has more than doubled every 12 months, ramping up to more than 1000 examples being launched this fiscal year. In a relatively quiet period for imports, 75 have found a home locally.

Over the last four years, the range has expanded to include the 37, with a modular design that allows for three different versions. The latest 37 Sports Cabin layout takes this flashy concept even further with a raked screen and a more comprehensive list of standard features. 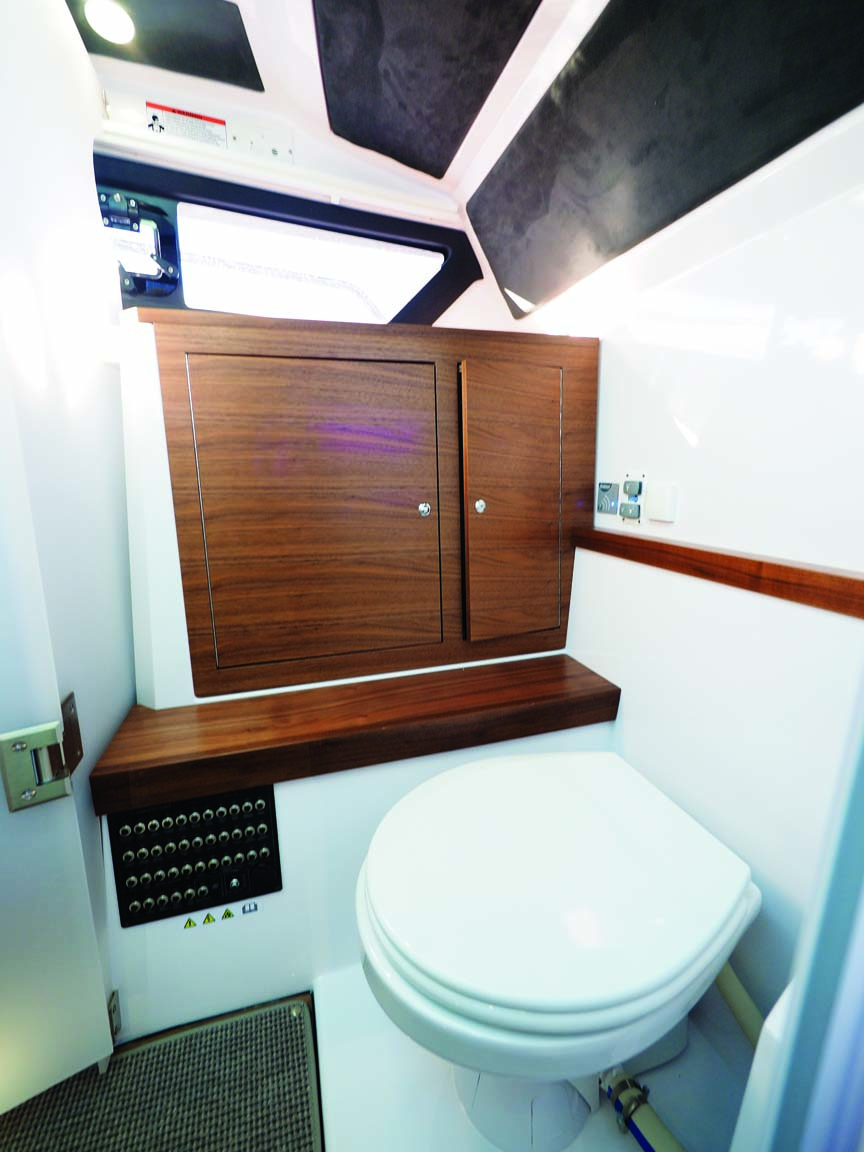 Adding to the radical image, our test boat flaunts a pair of 400 horsepower outboards, pushing it to more than 50 knots on a hull that slices rough water like the proverbial hot knife through butter. Contributing to this is a purposeful underwater shape featuring a sharp entry and a deep keel line designed to smoothly part the water for an exhilarating ride. Two hull steps optimise water flow, and a complex arrangement of chines and running strakes contribute to stability at rest for the relatively narrow beam and deep 20-degree deadrise at the transom. The unusual underwater surfaces and design can be seen when the boat is at speed and the first two meters of the hull ride clear in flat water. This distinctive attitude sets the Axopar stable apart, and despite their hefty price point, they have become a growing force among day-boating fleets around the country – particularly in Sydney. Adding to the visual appeal is an awareness that these are very practical and versatile craft. Local importer, Peter Hrones, tells me that some offshore fishers have been drawn to the brand because of their extremely sea kindly ride and blistering speed. Journeys to distant hot bites can be exhilarating and quick, and widen the usability of the 37 over many dayboats confined to a safe harbour.

There's no hiding the stark lines of the 37, but the raked screen of the Sports Cabin softens the boxy profile and firm angles of previous iterations, making it less like the boating equivalent of a Land Rover Defender than the Cabin version.

That said, the battleship grey sides, prominent black rubbing strip and side rails, which are part of the upmarket Brabus trim package, lend a menacing military presence that might worry anyone caught unawares by its sudden approach.

Narrow side decks are protected by the powdercoated rails connecting exterior spaces at each end. The versatile bow caters for lounging on a vast sunpad or dining at a table set between the lounge and forward cushions on the anchor locker. The huge cabinet makes a very practical walk-through for boarding, and a monster hatch in the front section of the sunpad opens to load luggage and provisions through to the forward cabin.

Down the back is a small cockpit for the more active pursuits of fishing, swimming, and entertaining. The transom is an unusual open setup with unfettered access to the water either side of a pair of glimmering white 400 horsepower Mercury Verados. With this sort of power in a four ton hull, this boat has some serious get-up-and-go, so I could well imagine anything not firmly secured on deck could fly out the back on take-off. I noticed slots in the floor for a set of rails, and I think they would be a worthwhile inclusion.

The 400 horsepower engines were fitted as a special one-off test platform for the factory, and although they dialled performance up a notch, the normal maximum of 350 is plenty.

There is a variety of cockpit layouts including a rear cabin, but the review boat has a sensible day boating option of a wet bar with big chest fridge and a sink, with room alongside for a small BBQ. The cabin roof line extends over the wet bar, but because it is quite low, the end section hinges up out of the way on gas struts to give plenty of room to prepare food.

Huge side lockers are insulated for use as coolers or kill tanks, and there are lots of storage options in spaces under the cockpit sole. Neat touches here include a well-concealed telescopic shower head on the port coaming and a retractable ladder under the port swimplatform.  You will also notice in the photos that all controls and lines to the engines are located safely and neatly out of harm's way.

A minimalist Nordic chic permeates the interior with slate grey Niroxx covering on lounges, the electric roof and dash, but there’s enough real walnut trim for a nautical vibe.

With a big opening roof, sliding windows and doors each side, the cabin can be as open or as cosy as you like, depending on the weather, so the boat is just as suitable for our southern waters as it is for the tropics. Windows all around offer unrestricted views, and there is plenty of headroom and space to move around easily.

An L-shaped lounge at the rear of the cabin has seating for five around an extendable timber table, with two extra seats made available by reversing the helm chairs. The table drops to make a full-width daybed or occasional overnight sleeping for guests.

A hatch to port of the helm leads down to the forward cabin with lots of light from ports to the side and up front ahead of a double bed. Head height over the bed is restricted by the ceiling that slopes down towards the bow, but there is plenty of room in the main section, where there's a Jabsco electric toilet with privacy curtain, hand basin and a small wardrobe.

The helm has a modern, performance-boat feel with perfectly stitched non-reflective Niroxx trim on the well appointed dash. Adjustable angle for the wheel and a sliding bolster chair with armrests will let most skippers find a comfortable driving position, and I noticed the view was unrestricted at all angles, even when turning sharply at speed.

Two 12-inch Garmin screens for sounder, GPS and radar, a 7-inch VesselView engine monitor, joystick trim control and Side-Power thruster meant the test boat was equipped to handle anything, while making the operation as easy as possible.

At low speeds, there was virtually no engine noise in the enclosed cabin. Cruising at anything up to 25 knots was a pleasantly quiet and a soft ride over the regular Sydney Harbour chop as we headed towards the Heads before giving the Verados a more spirited run.

A provision of 800 horses on a lightweight hull should be a performance package that thrills, so we were pretty happy to reach 50 knots from 17-inch propellers although Peter Hrones expects even more once the Mercurys have run up a few hours running time. He also predicted up to 58 knots with 19-inch props. We turned around to face a 20-knot westerly whipping down the channel and even into such a breeze at full noise the boat felt well balanced, safe and predictable.

Even though the wind whipped up a nasty short chop, the Axopar turned without hesitation and without any shuddering or wallowing.

It’s hard not to be impressed with the ride, handling and performance of the Sports Cabin, all contributing to make it extremely enjoyable and safe to drive.  Throw in the dramatic looks and versatile usability, and you have a real winner.

But at $458,000, as tested, it might look like an expensive toy. It’s only when you get to know it a little better that you realise its more than a plaything restricted to hooning around the harbour.

Sure, it does the harbour dayboat thing without raising a sweat, and the family will love spending time on board. But point it towards the horizon and it'll eat up the miles to your favourite bolthole for the weekend.

Every time I have driven an Axopar, it has been exciting and enjoyable. It's hardly surprising that it took the Finns to remind us of the pleasure to be had simply “messing around in boats".

The Axopar excels in the way it rides and performs in rough conditions. The looks might not be for everyone, but those who choose it for its performance will find a boat that will fulfil a big range of roles with aplomb.