Originally built for Mr Reg Allen as a 36-foot Standard Cruiser, this wonderful Halvorsen is now owned by David Jones, who recently completed a thorough re-fit and re-power.

Launched in September 1949 as Avonia, the cruiser was Halvorsen Job Number 958, powered by twin Chrysler Crown petrol engines and was the 11th 36-footer built by Halvorsen. Initially Avonia was a sedan cruiser, with the flybridge added in 1991 by Halvorsen at Bobbin Head.

At that Halvorsen-history-laden location, David acquired Constellation in June 1995. The previous owner had the boat for 19 years whilst it had been named My Fair Lady — it took David three months to convince the owner to sell his treasured Halvorsen. 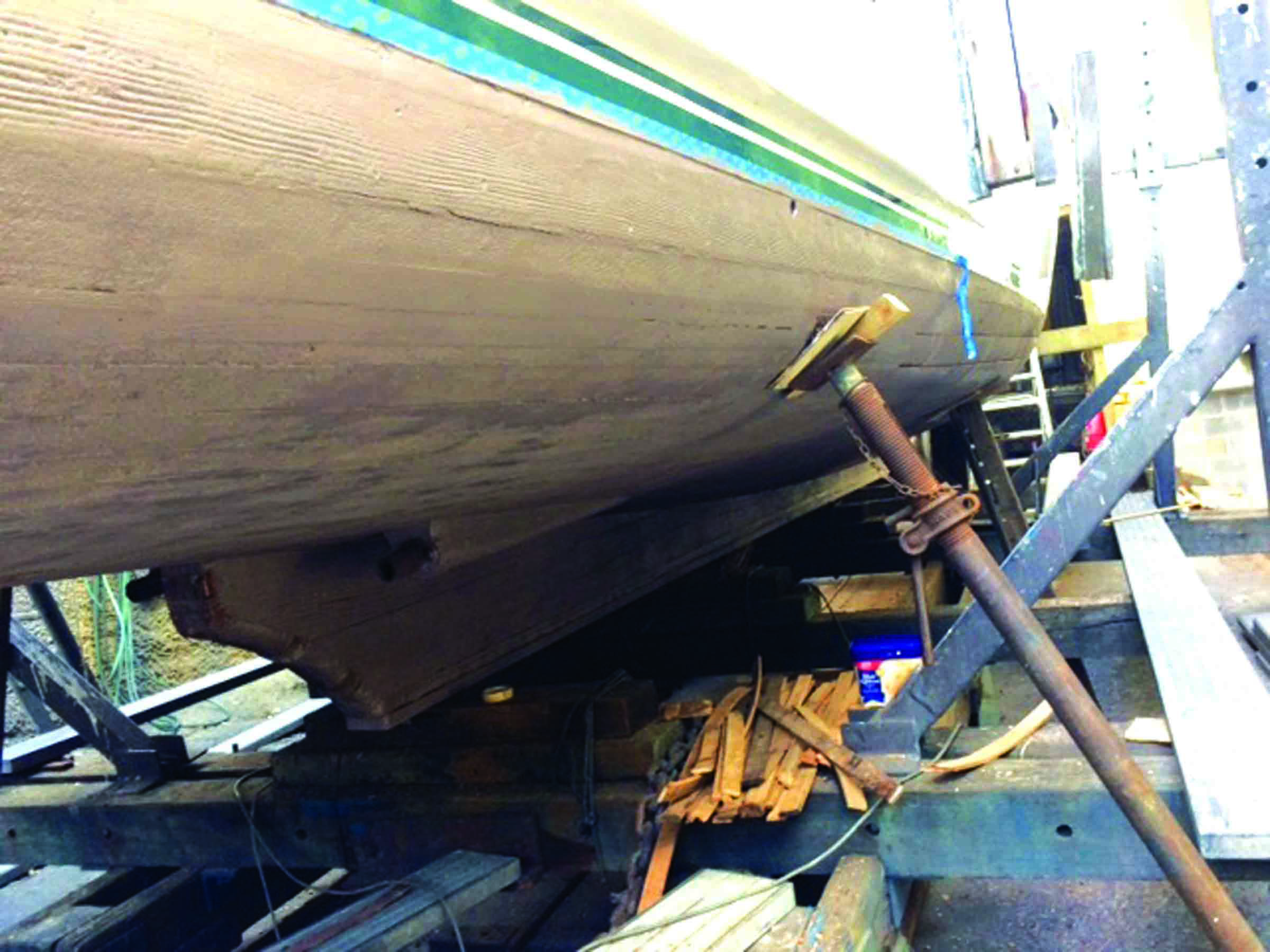 David explained about the name change: “The name My Fair Lady suited the boat previously as it had period-style carpet, curtains, lounge coverings, cushions, and even glasses etched with the name.

“When I acquired it, my wife, Louise, and I wanted the boat to be more appealing in lighter shades and to highlight the lovely timber work which was looking very unloved. So, I completely re-worked it all, both internally and externally.

“When we joined the Halvorsen Club, we attended many raft-ups and other meetings, and we came to view the gathering of Halvorsen ‘stars’ as similar to a cosmic constellation. As well, not long before, my wife had purchased a beautiful Omega watch called Constellation that she loved, so the two factors led to the name change, and we’ve been very happy with it.”

David had previously owned several different boats, such as an 18-foot Steber Craft speedboat and 20-foot Bertram half-cab cruiser, and purchased a 26-foot Halvorsen called Jill in 1992. That had been in the Halvorsen hire fleet until insurance changes no longer provided cover for wooden hire boats with petrol engines. Jill served not only as a delightful boat in its own right, but further fired David’s passion for the style and charisma Halvorsen designs encapsulate so well.

When a larger boat was sought (and David had been told that, “if you want a bigger boat, go up an extra 10 feet!”), there was no doubt it would be another Halvorsen, especially when David fell in love with the flybridge design.

Constellation is constructed with oregon planking on spotted gum ribs and frames, as well as Queensland maple for cabin sides and the interior fit-out. There is Dynel-sheathed marine ply on the decks. The layout is ideal for cruising and entertaining, with a large saloon carrying settees either side aft of a port-side helm station. The port settee opens out into a double bed and the starboard settee can be used as a single bed.

Twin settees also grace the cockpit while forward of the saloon and down a couple of steps is the starboard-side galley with a larger-than-expected bathroom opposite. Further forward are vee berths over extensive storage drawers, while right through the cruiser is the gorgeous cabinetry that has come to symbolize the Halvorsen name.

Teak steps from the aft deck lead up to the spacious flybridge which extends back over the cockpit providing extra room above and more shade below. A central helm seat forward gives commanding views over the foredeck to the waters ahead, and a set of twin settees on either side comfortably accommodates crew and guests as they keep the skipper company.

THE RE-FIT AND RE-POWER PROJECT

In late 2016, David decided to undertake a thorough re-fit and re-power of Constellation mainly because the then-installed 202 cubic inch 112hp Holden petrol engines were 13 years old. They were salt-water-cooled and sooner or later that would have led to enough corrosion to cause problems. David wanted to ensure reliable operation into the future and to get away from using petrol as the fuel. He also planned coastal cruising to Sydney Harbour and the north coast of NSW and wanted to feel secure in offshore conditions. He knew some of the hull’s ribs were broken, and the ideal time to fix those would be when the engines were removed.

David entrusted the project to highly regarded shipwright Andrew Storey at Cottage Point, although he also carried out many tasks himself, at times with assistance from his son Alexander and support from his wife Louise.

David explained, “We first started this project in early September 2016, although I’d actually initiated much of the detail planning two years before that. The first step was to remove both engines, so I stripped off all the auxiliaries to lessen the weight. Then we set up two A-frames and a lifting beam to haul the two engines out of the bilges. We placed them at the back of the boat and stripped out all the components associated with them such as the electrics, the dashboards, the control cables, the fuel tanks, lines and filters plus the exhaust systems with their water locks and transom outlets.

The rear bilge was repainted first, before the paint was removed from the engine bilges so the new ribs could be fitted. The boat was slipped, and all previous anti-fouling paint removed by soda-blasting. Two planks from either side had to be removed to expose some broken ribs in the engine compartment. Once they were out, a start was made to clean up the old ribs where they were broken.

New spotted gum timber was steam-bent to fit the shape with three laminations per rib, all screwed together internally and from the outside planks as per normal fitment, which David noted, “was a difficult job!” When that work had been completed, the two planks that had been removed were replaced with new oregon timber.

Once all the re-screwing had been completed, David started painting the inside bilges. The two water tanks were moved forward to gain access to the tank platforms underneath so David could repair them and paint the other frames and bilges under the tanks.

The rudders were removed so the props and propeller shafts could be taken out and sent to J H Porter for checking. New propellers were then made to suit the incoming engines and gearboxes.

The bottom of the boat was fully sanded down, all the joints were raked to remove old putty and then re-caulked where necessary — mainly to tighten the seams. The prop shafts were re-installed with the new propellers, with the rudders also being replaced. New exhaust outlets were fitted, and the transom lower planks had some repair work carried out.

The bottom first had two coats of Everdure epoxy, then three coats of primer before two coats of anti-fouling were applied — a further third coat was added at the finish and a bottle green waterline added. The boat was launched into the water after six weeks of intense work on the slipway during the sweltering summer days of December 2016 and January 2017.

However, the hull started taking a lot of water, so Andrew re-slipped the boat to inspect joints that were slow to take-up. Further caulking was carried out over two days, then the boat went back into the water, and this time all was well.

“The boat was returned to the pontoon outside the workshop for more internal repairs. The two water tanks were removed to be cleaned and painted. Once back in the boat, extra inside engine bearers were added to the current four bearers as the new motors were 100mm narrower. I fitted the stainless-steel oil trays to the bearers and finished off painting all the bilge/bearers,” David said.

The pair of 110hp Yanmar 4UH4-HTE diesels were placed into the boat and aligned to the new couplings, before the engines and boat were rewired by a marine electrician. David then fitted new fuel tanks, fuel lines, fuel filters, rubber exhaust tubing and fibreglass piping to the water locks and transom exhaust outlets. New air inlets and outlets were fitted as well, while new battery boxes were made, and the gear and throttle cables fitted.

“The engines were then started, and I checked that all the piping/hoses and fittings were okay. The floor timbers were replaced, and all new floorboards fitted and varnished — we added new sound-proofing as well,” David said.

The first test run after the work had been completed took place with an engine technician onboard, and everything was passed and warranted. All internal furniture was re-fitted, and the saloon settees plus other internal timber work were freshly varnished.

Constellation cruised back to its mooring in Pittwater during July 2017. A new flybridge cover was made, new varnish applied to the teak toe rails and all the outside timber work was re-varnished.

The 110hp Yanmar diesels have resulted in a very pleasing performance, topping out around 13 knots, with economical cruising at 8 knots to give a conservative range of some 450 nautical miles. Two fuel tanks hold 170L each, and the pair of 512L freshwater tanks give the crew a comfortable cruising range as well. Navigation is aided by a GPS Plotter and a depthsounder while the galley has a gas stove and oven plus two 12V fridges and a freezer. An inverter provides domestic 240V power, and a Honda 2kVA genset has been installed.

David, Louise and Alexander mainly enjoy Constellation cruising and entertaining on Pittwater and have also made the run up to the Colo River. David has found performance to be above expectations.

David summed up, “Since the restoration, Louise and I have been enjoying the boat on a more regular basis than ever before. In the future we will be more adventurous with our trips. In total it has been a very satisfying project. Sometimes it appeared to be never ending, but all good things take time and I thank Louise for being so patient with me. I would also like to thank my son Alexander for all his assistance on this project. I love the shape, space and the flybridge — and particularly that it is a Halvorsen!”