Cruising catamarans are one of the strongest growth sectors in boating right now for some good reasons, which include spaciousness and stability. This has prompted many new offerings but some yards have been building cats for longer than others; Catana being one such manufacturer. The latest of these unashamedly comfortable cruisers – that comes in both power and sail versions – is the 5.4 yacht. This flagship model is aimed at motorboaters as well as sailing enthusiasts because its vast 55-foot hull packs a lot in, including both foredeck and covered aft cockpits.

Among the features of catamarans are their two engines, which are located farther apart than an equivalent monohull, giving them incredible manoeuvrability and inbuilt redundancy. This can blur the lines between sailing and power versions. The catamaran design equation is further tweaked by the creation of flybridges, as found on the Bali 5.4 and several others from market leaders Lagoon and Fountaine Pajot, which compromises some stability by elevating the sailing rig even higher. However, given the modest sail areas and the easy ability to reef, this is understandably a popular design which creates three levels of living space; something I experienced in full during a two day voyage on the Bali 5.4. 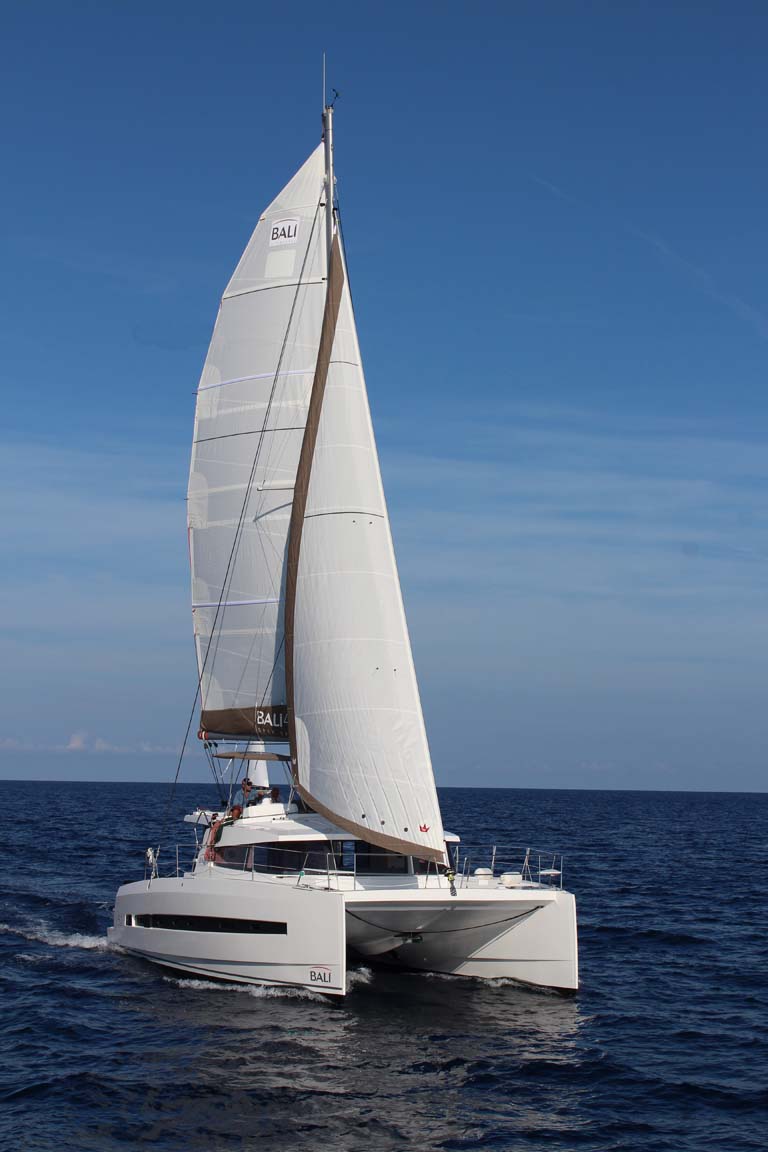 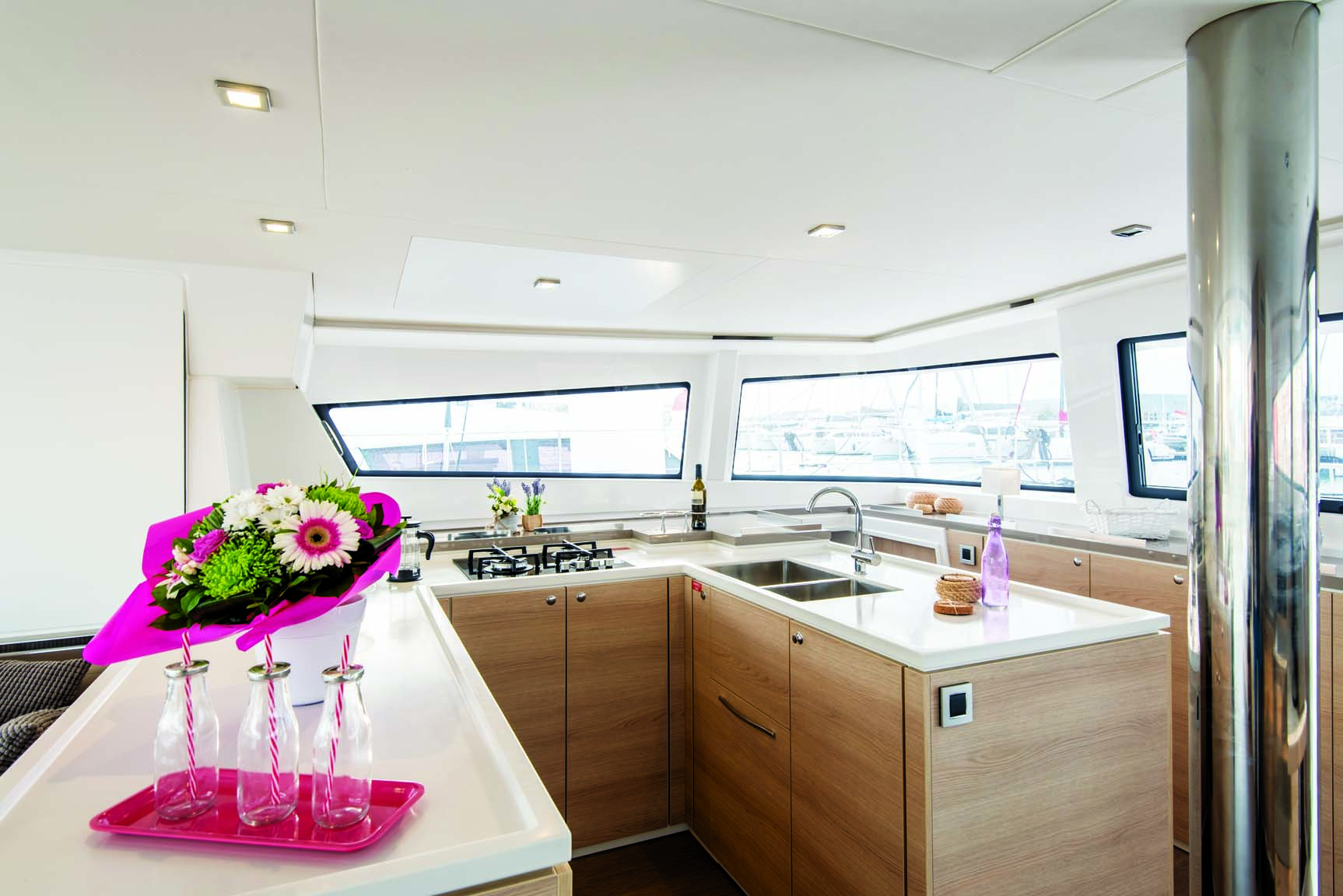 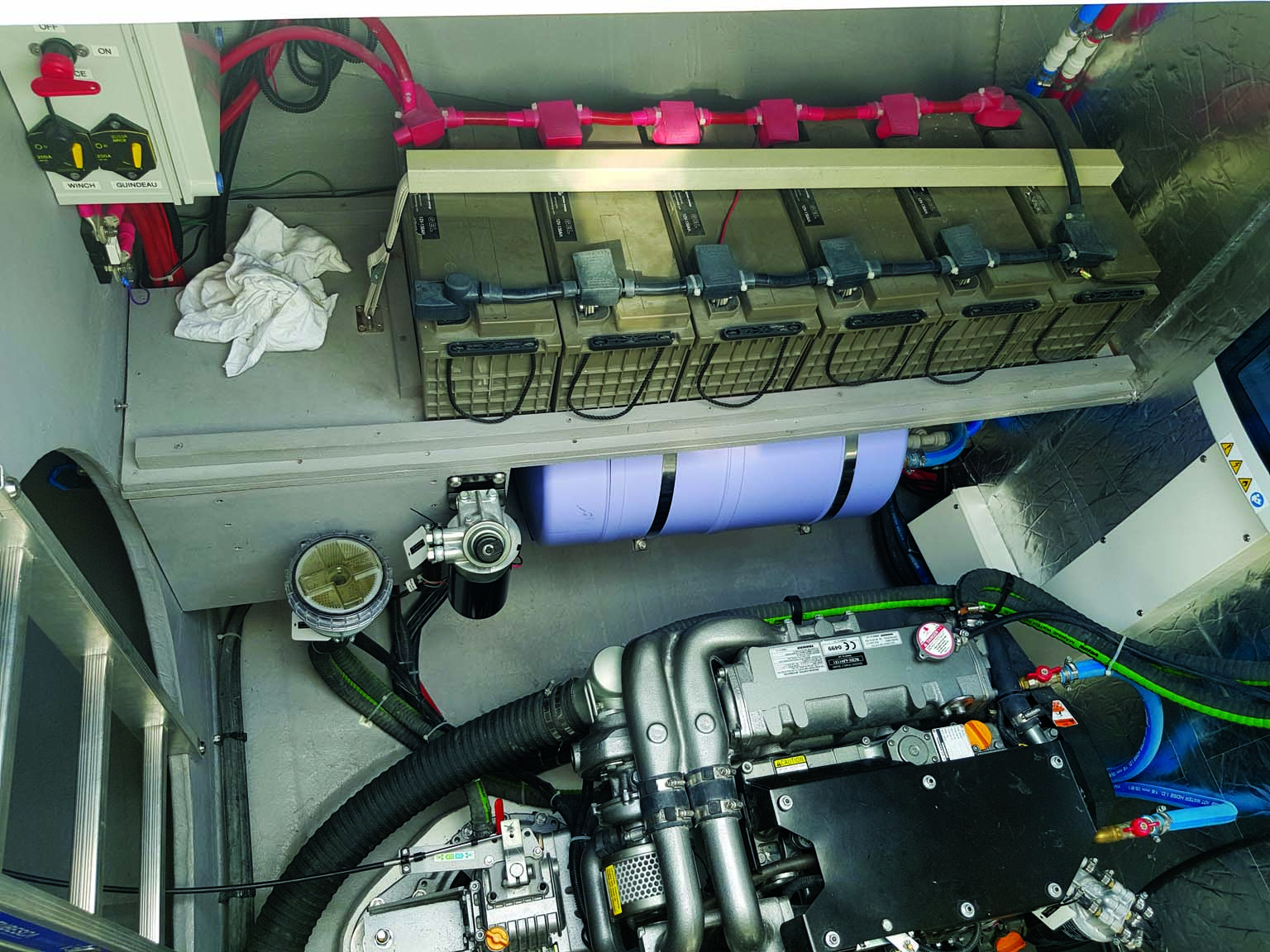 Given the stiff competition, Bali designer Oliver Poncin cleverly sought a market differentiator and found it in a word – flexibility – which dictated the approach to the entire Bali range.  The main attraction on every Bali is the moveable aft bulkhead that creates a vast entertaining space. Other access points around the boat include two stairways to the flybridge and bow entry via a saloon door. Water access is yet another plus thanks to the transom platform that holds a dinghy and swim ladder on the starboard hull. These features, along with the spacious three level layout, have appealed strongly to both private owners and charter operators such as Dream Yacht Charters Australia and sister company Dream Yacht Sales. Boss Christophe Vanek has supplied several smaller Balis and has a 5.4 coming to Sanctuary Cove in 2019, he told me when we met at the Cannes Boat Show to look over the first hull built.

Looking over the Bali 5.4 as it sat among 50 other competing models that included Leopards, Fountaine Pajots and Lagoons, it was clear that similar approaches have been taken to how space is maximised on a flybridge catamaran. The result is fairly angular aesthetics which is perhaps more functional than sleek; or dare I say pretty. Notable features included the voluminous and tall hulls with plumb bows running aft to wide transoms; the latter is ideal for carrying heavy cruising loads. Topside, the flat decks with flush hatches allow unimpeded walking space, topped off with the high flybridge lounge space. The large flybridge has access on two sides with all sail controls here at the single helm that is starboard-side. These include a sheet winch on port and starboard with a short run for all lines from the mast. Electronics comprise a Raymarine plotter screen and the essential autopilot. Another screen I used in earnest during the night-time sail down the French coast was the AIS-VHF screen to identify shipping.

On the main deck the aft part will be a key selling point for prospective buyers, especially coming from a motorboat background where unimpeded relaxing space is enjoyed. Another attraction will be the direct access to the aft cabins from gull-wing style doors on each hull. The entire area is shaded  by the flybridge extension which is strongly supported by large diameter stainless struts and seamlessly flows into the saloon; at the click of a button the aft bulkhead lifts upwards.

Inside, the saloon is dominated by the longitudinal dinette table surrounded by an L-shaped sofa and ahead of it is the galley, ideally placed for serving food. Over to starboard is the navigation station and ahead of it are the stairs down into the hull.

This layout means the forward saloon bulkhead is a walkway and contains cupboard space and the door through to the foredeck cockpit – an arrangement that allowed our four crew to move about easily when socialising here. The sunken foredeck cockpit with benches and table is a wonderful area and has good practicalities such as deep lazarettes, a powerful Lofrans 1700W vertical windlass and large chain locker. The optional generator can also go here, to balance the trim.

Given that the Bali 5.4 can sleep 12, catering needs to be on a fairly grand scale and owners won't be disappointed with the huge household fridge and generous Corian work surfaces around the U-shaped galley, plus flat space on the forward bulkhead. Cooking is done on the four burner gas hob with oven nearby, while barbecue food is put on the electric plate on the transom. Other plus points include the deep double sinks and fiddles around all work surfaces.

The standalone navigation station has space for several plotter screens and the main control panel, plus a second autopilot screen; I controlled the Bali's steering from here when I was alone on watch.

This first hull is intended to show the full potential of the Bali 5.4 and thus came with four large cabins plus a crew berth forward in each hull.  Alternatively, the charter version squeezes in six cabins and up to eight toilets which is quite amazing; but perhaps less so if you are the resident plumber. Accessed by walking down the steps in the forepart of the saloon or from the aft deck, my first positive thought was “great flow-through in the tropics” when that bow door is opened. Avoiding the drone of air conditioning and booming generator is one of my raison d'etres when at anchorages so this layout definitely got my vote (and was put to the test a day later at my favourite spot, Isle de' Hyeres). All four cabins have ensuites and all have queen size athwartships island beds (with separate mattresses). Nothing particularly fancy or unique but voluminous and with plenty cupboard space.

Catana use the latest infused foam moulding system to create a relatively light but strong vessel. Unusually for a sailing catamaran, the entire foredeck is fibreglass (rather than trampolines) which could cause some wave impact but on the other-hand does increase rigidity. Twin mini keels protect the spade rudders which are behind the sail drive legs, so in theory the hull can dry out or survive a grounding. Inside, the engine room on each hull is spacious, allowing them to house hot water, air conditioners and house batteries with room to spare. All service points – water, oilways, drive belts and injectors were visible on the Yanmar engines. Also, here I could see the the sturdy steering linkages and quadrants (that are on stainless shafts), along with the emergency tiller (should the hydraulic steering fail).

I liked the Bali 5.4 so much that I offered to help deliver it back to the French yard, a nearly 400 nautical mile journey along the lovely Mediterranean coast. Having lived on the shores of the Mediterranean  for seven years I confess a strong liking and familiarity with the region, so little excuse was required for a sail along near the Spanish border.

Leaving the hectic Cannes boat show behind, we motored west towards the tranquil coastline that would lead us to the turquoise waters of Saint Tropez bay. Under power the 57hp Yanmars effortlessly pushed us along at 8.7 knots while turning at 2400rpm before I pointed us windward to hoist the mainsail. Along with company representative Will, we quickly hoisted the sail through the lazyjacks using the electric Lewmar winch before unfurling the genoa. Lacking a window in the sail, this obscured my view so required me to occasionally go downstairs to watch for shipping. Trimming the genoa also required me to go down to the main deck winches on each side but at a pinch these sheets could be run on blocks to the flybridge. Seeking the sea breeze, we neared the red sandstone mountains that roll down to the old Roman town of Frejus where there was 7.8 knots of wind which gave us 5.8 knots of boat speed at 100 degrees. Then, with the engines stilled and propellers folded I clicked the autopilot as the shout from below came – “le déjeuner!”. About as good as it gets, in terms of both the Bali 5.4 and the cruising ground.

The Canet-en-Roussillon based yard’s reputation as the French builder of performance cats took a different tack with the introduction of the Bali series in 2015. Since the company formation in 1984 its sleek performance-cruisers had defined it, with models such as the Catana 47 being one of my favourite all-time cats. The company’s long-term designer Christophe Barreau has done some serious adventuring in them as well as other sailors who’ve circumnavigated.

Recent models come from the pens of Olivier Poncin/Xavier Fay, who, along with Barreau have created a range that comprises five models of 42-70 feet, while in their popular selling Bali range are eight models ranging from the Bali 4.0 to the Bali 5.4. The newest and just imported by dealer Dream Yacht Sales into Australia is the 4.1 which will debut at Sanctuary Cove and appear later at Sydney. When visiting their modern yard near the Spanish border, sales director Boris Compagnon told me they build about 100 hulls annually and the Bali range dominates these numbers, reflecting the growth for comfortable cruising catamarans.