With the Haines Hunter V17L, the Haines brothers produced one of the best fibreglass trailer boats in Australia. John Haines fondly referred to the 17L as the executive model made by the ‘shiny bums’ – we call the Haines 17L an Aussie boating icon.

The Haines Hunter boat story began in Queensland in 1959 when founders and brothers John and Garry Haines applied their fibreglassing skills to building boats in a backyard workshop. Thus began a multi-generational Australian fibreglass boat family business that has been highly influential in the development and design of Australian powerboats.

They originally produced boats under contract to Australian company QPS (Queensland Pastoral Supply) which was importing the 12ft, 14ft, and 18ft Bertram hulls from Canadian firm Toronto Yacht & Boat Centre in 1960/61. The early boats featured a reverse chine design with a big flared bow requiring a split mould construction. Their deep-V bottoms and broad beam made them larger in volume than any of the narrow-gutted, flat-bottomed Australian boats in their class, so they were renamed by measuring the length around the gunwale instead of their centreline length. 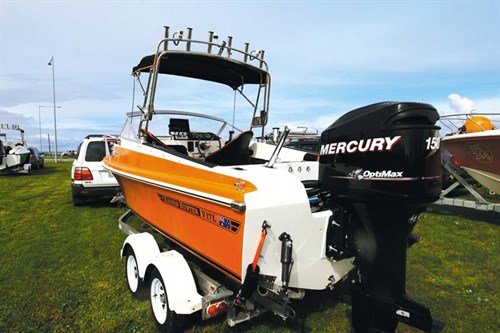 Thus the original hulls evolved from V12 to V133 (Sea Wasp); from V14 to the Hunt or Bertram V15; V18 to V19R; and eventually the Formula 233 became the Haines Hunter Formula 233, plus all the countless offspring.

The original 12, 14 and 18ft moulds featured the patented Hunt Hydrolift hull, with the 12ft and 14ft also having a patented tunnel-hull construction similar that used by Barcrusher and Surtees today.

Throughout the 60s and 70s the Haines brothers maintained an exhaustive offshore and ski-racing program, becoming quite the local heroes. Meanwhile, in 1964 Archie Spooner – of Australia’s International Marine – negotiated the rights to produce the Bertram Yacht range from Richard Bertram and so Victoria’s Caribbean Gardens became the home of Bertram and Caribbean Boats in Australia.

This was of little consequence to the Haines boys; their names had risen to the top of the Australian boating market so they were confident in creating the Haines Hunter brand, acknowledging the original designs of American naval architect Raymond C Hunt.

The brand grew alongside other Australian legends such as Cruise Craft, Seafarer, Savage and Caribbean, yet few others achieved the same status, which was the result of terrific manufacturing quality, great designs and exceptionally soft-riding hulls.

Origins of the Haines V17

In the late 60s or early 70s a confident John Haines took an imported Canadian 16ft pattern and altered it to include modified strakes and a more hollow flare. This was John’s first foray into design change, and it gave birth to the extremely successful V17.

“The V17L was affectionately known as the executive model,” Garry Haines says. “At the time the economy was suffering and John Sr decided the ‘shiny bums’ would put on the overalls and produce the latest model. It has become a renowned success with a longstanding reputation for its innovation and performance. John’s early policy to develop through downturns stood him in good stead many times.”

The early 1970s was a period of great change. People were breaking away from tradition. Look at the fashions – polyester materials, bright pastel colours, tight-fitting pants with flares, open-neck shirts with big collars, high-cut boots and hot pants.

The Haines boys set new trends with the shape of the V17L. Gone was the traditional square-cut half cabin, in came a sporty new sloping peak that turned heads – and still does!

But as often happens, practicality suffered for fashion. Whilst the deck shape was terrifically appealing it offered little other than a bullet-shaped nose that pierces through those steep waves that just jump up out of nowhere occasionally. The low cabin height made it difficult to navigate internally and you had to be a contortionist to get out to the anchor hatch, especially in pre-anchor winch days.

There was also little storage other than a pair of side pockets, and the low dash provided very little protection from a head-on sea. In reality it was more of a raised runabout than a half-cabin boat. Its stable-mates the Haines V17C (cabin) and V17R (runabout) were more useable configurations but the V17L had the looks, plus tremendous balance and feel that were truly unique

The Haines Hunter V17L does have a reasonable amount of deck room compared to many half-cabin boats of the era and it features a low centre of gravity with nice high coamings, giving a terrific feeling of security. At the stern it featured twin moulded seats and a traditional engine well layout with an underfloor fuel tank as standard.

The ride quality of the Haines V17 hull has never really been improved in any equivalent production boat.

They are simply exceptional and while there are certainly some commercial offerings that may exceed the soft-riding and exacting performance characteristics, many use far heavier construction and generally have similar lineage.

The biggest criticism of the V17 hull is that the relatively narrow beam (2.06m) and deep 22-degree deadrise make them a little sloppy at rest and a touch tippy with moving loads. While I think any such instability issues are played up greatly, I admit they certainly rock considerably in a big sea.

What to look for

They were produced in original form for just over 10 years, from the early 1970s to the 1980s when a company spill saw John and Garry forced out, and the designs then progressed to metric definitions – the 490, 520, 550, 580 SL, SLR and SLC models. This means original V17Ls are now up to 45 years old yet many look as good today as they did then, preserved by proud owners who appreciate their quality.

Whilst they were built with quality processes and materials, there was timber in the transom, stringers and floor and this can be rotten if they have suffered water ingress. Underfloor fuel tanks corrode – yes, even stainless steel – and the underfloor fuel lines and fittings corrode.

One feature to look out for is common to many deep-V hulls of the era. The originals were constructed with 20in transom heights suitable for long-shaft engines, not the extra or ultra-long transoms of today. They performed well with the four-cylinder two-strokes of the day but even the heavier OMC V4 140 and Mercury six-cylinder engines sat low on the transom. The ‘slop stopper’ is the rubber boot that seals the hole in the side of the engine well where the steering, gear shift, throttle and power cables thread through the hull, but the base of this hole is actually below transom height and many a boat has found itself in strife when sloshing water feeds back through the rubber boot and directly into the back of the hull. The best fix is to install hydraulic steering with higher through-hull fittings and permanently seal the slop-stopper hole, or follow the trend to retrofitting a new outboard pod.

Classic Haines Hunter V17L boats are highly sought after – among the most popular boats ever produced in Australia – so resale values are high, while availability is low. A beaten and worn original package will still fetch $6000-8000 and a plum model with original engine may still achieve $12,000 to $18,000. We often see magnificent refits with enormous new engines, pods, wave breakers, tandem trailer and a host of accessories priced and sold at $40,000 or more, but most reasonable packages are priced in the high teens to mid-$20,000 range.

Varies considerably depending on condition