The Haines Hunter 560F sparked new life out of the turmoil of ownership changes that hit Haines Hunter boats in the 80s and 90s. Despite launching against the tide of the “recession we had to have”, the fresh Haines Hunter 560F and larger Haines Hunter 580SF achieved terrific success from the blend of traditional deep-V hull design, low-line cuddy cab configuration, and large deck layout.

Runabouts and cabin boats were boating’s mainstays until the early 90s when deck space became king. The Haines Hunter 560 offered a full-length (6ft) enclosed cabin with V-berth and perhaps the largest deck in its class. Competitors such as the Cruise Craft 533 Reef Raider came close but never featured full-length bunks. Yalta made a good attempt but never quite matched the ride of the 560.

Haines Hunter went through corporate turmoil from the mid-80s when brothers John and Garry Haines lost the controlling shareholding and then the entire business which went through various owners, receivers, management groups and eventually OMC – the Outboard Marine Corporation – manufacturers of Johnson and Evinrude outboards. 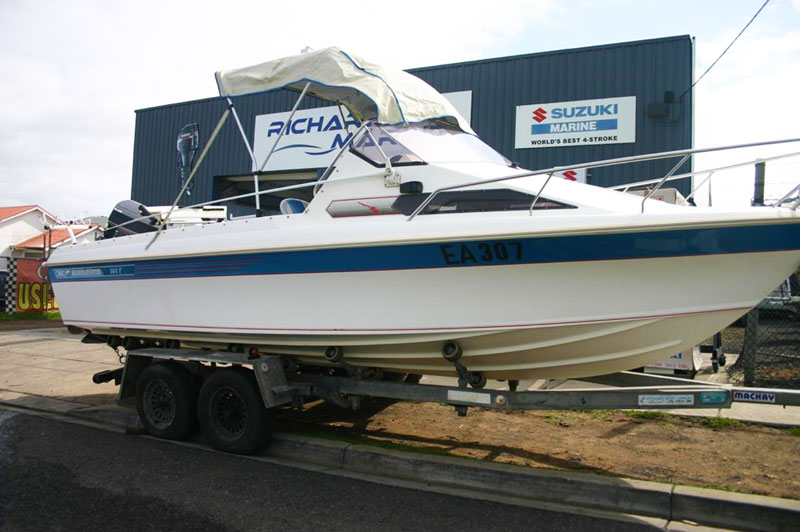 The hull was a natural progression of the mid-60s Bertram V18, the reshaped hull providing greater efficiency both in production and out on the water. The undersides are reminiscent of the Haines Hunter-built V19 that morphed into the Haines Hunter 565 in the R, C and L series of the 1970s and early 80s, as well as other models from the era including the Haines Hunter 550 and 580SL. The hull is one of the softest and most seaworthy in its class, with a low centre of gravity and excellent construction strength, and included a 25in extra-long transom.

The only real difference between the Haines Hunter 560F and the 580SF was the transom – the shorter boat formed a traditional engine well at the stern while the 580SF had a half-pod transom. Early Haines Hunter 580SF boats didn’t extend the pod to the keel; they suffered from low engine height due to the lengthened centre of balance and had so much flex that rear bait-tank lids were known to pop open! Later versions had full-depth pods but were never the boat the Haines Hunter 560F was.

Haines Hunter 560F hulls were rated to 150hp. Even though they were rarely sold with more than a Johnson/Evinrude V4 115 or 130/140, they performed beautifully. The original 140hp V4 two-stroke was replaced by the 130hp that reflected the true power and introduced oil injection to the same block. The early VRO injection system stood for Variable Rate Oil but was known in the trade as Very Rarely Operates – you’re better off with the older premix 140.

Depending on the dealer, Haines Hunter 560F hulls were commonly packaged on Dunbier and Mackay full-roller drive-on trailers in Victoria, with Tinka or Redco ex-factory in Qld. The package is easy to tow – the hull is 650kg, with engines around 168kg and trailers about 450kg. Add the 145-litre underfloor fuel tank and some accessories and a typical package will weigh 1500 to 1600kg.

The 560F comes from a line of Haines Hunter hulls with excellent riding characteristics and at this size they’re relatively stable at rest and simply do not have any defining drawbacks. They are among the softest and best-handling boats you could wish to drive.

Early 1990s Haines Hunter 560F hulls are a little lighter as towing restrictions were a problem while manufacturers were just beginning to realise the massive strength of fibreglass construction at this time, which explains why so many early hulls are still around.

You could repower a Haines Hunter 560F with an engine from 115 to 150hp providing the transom structure is still strong. The engine well and transom design will easily carry the extra weight of a new four-stroke outboard motor like the Mercury 135/150, Suzuki 140, Yamaha 130 or Honda 135. For the DI fans perhaps an Evinrdue E-TEC 130 will do. I’d recommend hydraulic steering with any new marine engine over 115hp.

What to watch out for

Test transom strength by leaning heavily on the outboard and checking for movement – most often seen in minute gelcoat cracks in the engine-well corners.

Check the floor strength by stomping all over it – if it seems soft or spongy mention it to the dealer and have it thoroughly checked. I once saw cracking around the cabin bulkhead in a 560F but this seems rare.

Ask for a compression test to be carried out in your presence. Specs on a cold engine may have the cylinders varying 5-10lb but if there’s more than 10psi variation further investigation is required. An engine this age needs the head gaskets changed every five years and a water pump kit and thermostats more often. Check the gearbox oil for water ingress through the prop seals – it’ll show up as emulsified oil. If the oil is relatively clear the dealer has probably changed it. If it’s black and smells like natural gas, don’t despair – it hasn’t been changed and it is totally natural.

How much are they worth?

A Haines Hunter 560F in serviceable condition at a sub $20,000 price is good value. You should expect to upgrade the outboard engine, marine electronics and canopy reasonably soon and check the trailer for rust. For added peace of mind, replace the underfloor tank as they do corrode.

An equivalent package to a Haines Hunter 560F of this size and quality would start at a price of $60,000 so one of these is worth considering.