It is the state’s oldest colonial settlement, founded in 1826 and proclaimed as a city in 1998.

The urban districts are concentrated in a hilly area, with magnificent views over Princess Royal Harbour and King George Sound. 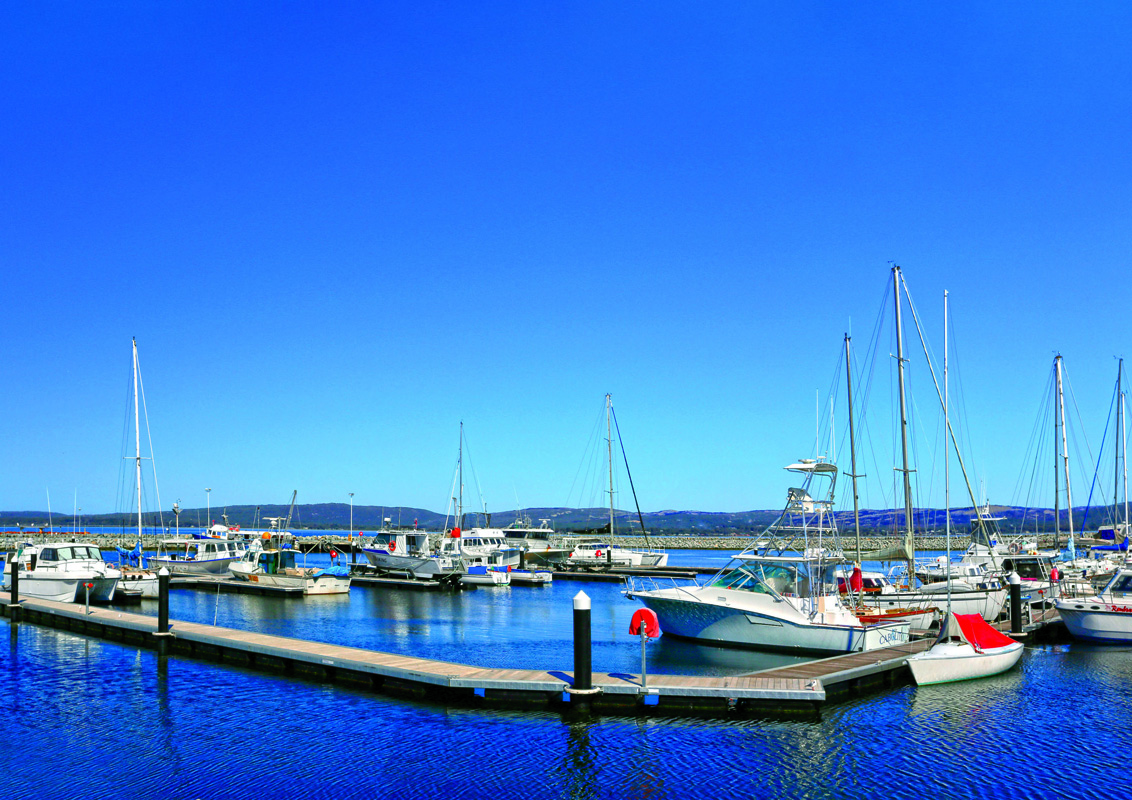 The city centre lies between Mount Melville and Mount Clarence, and its main thoroughfare, York Street, runs down to the port area at the northern edge of the Harbour.

Well-placed as a port of refuge from the stormy Southern Ocean, Albany was WA's only deepwater port until the construction of Fremantle Harbour in 1897, and continues to play a major role in the state’s maritime trade.

With a population of about 34,000, the city is an important regional service centre, supporting industries that include commercial fishing, timber and agriculture.

Tourism is also a major contributor to the local economy, based on seasonal whale watching, breathtaking coastal scenery and the Great Southern wineries.

The complex coastline around Albany encloses three main bodies of water – King George Sound, Oyster Harbour and Princess Royal Harbour – each with its own unique hydrography and character.

King George Sound covers an area of 110km2, bordered by the mainland to the north, Vancouver Peninsula on the west and Flinders Peninsula to the south.

Although the Sound is open to the east, its entrance is partially protected by Breaksea Island and Michaelmas Island, which lie northeast of Bald Head.

The entrance and approaches are deep and well marked, with depths varying between 10-35m, the deepest part being a basin in Frenchman Bay, west of Seal Island.

Emu Point marks the entrance to Oyster Harbour on the Sound’s northwestern shore, while Princess Royal Harbour is accessed on the western side via Ataturk Channel.

Oyster Harbour, northeast of the city centre, is roughly rectangular in shape, about 5km long and 3km wide, covering an area of 15km2.

The Harbour is fed by the King and Kalgan Rivers at its northern end and joins King George Sound by a channel at Emu Point that is 200m wide and dredged to a depth of 10m.

About one third of Oyster Harbour is less than 2m deep, shallow along its eastern shore but more than 5m deep near the western shore and in the southern basin.

The Harbour’s low-lying margins contain mudflats, wetlands and saltmarsh forests that are important feeding and roosting areas for waterbirds and migratory waders, especially in the summer months.

Princess Royal Harbour is an oval-shaped bay lying directly south of the city.

Vancouver Peninsula stretches along the eastern edge of the Harbour, protecting it from the swells of the Southern Ocean coming through King George Sound.

Shallow sand flats lie along the western and southern shores.

The Port of Albany extends for 600m along the Harbour’s northern shore, to the east of the city centre.

While about half of the Harbour is less than 2m deep, the narrow Ataturk Channel is dredged to 12m for about 2km into King George Sound to facilitate the passage of ships to and from the port.

For more than 25,000 years before the arrival of Europeans, the Albany region had been occupied by the Menang Noongar Aboriginal people, who called the area Kinjarling, meaning ‘the place of rain’.

The first known European sighting of this southern coastline is attributed to the Dutch mariner Peter Nuyts, who sailed along it in the Gulden Zeepaard (Golden Seahorse) in 1627.

When Englishman George Vancouver sailed into the Sound in 1791, he declared it to be "the finest harbour in the Southern Hemisphere", and named it after the reigning monarch, King George III.

Ten years later, during his circumnavigation of the continent, Matthew Flinders surveyed the harbours and collected samples of more than 500 plant species from the surrounding hills.

Accordingly, in late-1826, the brig Amity was despatched from Sydney carrying a party under the command of Major Edmund Lockyer, with orders to establish a military outpost of New South Wales at King George Sound.

This he did on December 25, 1826, formally taking possession of the western third of the continent of Australia for the British Crown, and naming the settlement ‘Fredrick Town’ after King George's second son, Prince Frederick.

In 1831, the settlement was transferred to the control of the Swan River Colony and renamed Albany by Lieutenant-Governor James Stirling.

Whaling and sealing vessels frequented King George Sound during the 1840s and, with the opening of steam ship routes to Australia in 1852, Albany became a busy port, servicing the immigration and produce needs of the colony and exporting timber and agricultural products.

In the 1890s Albany was the ‘Gateway to the Goldfields’, as thousands of prospectors arrived at the port to connect with overland transport to Kalgoorlie in the east.

At about this time, Albany’s strategic position (as the only significant port between Perth and Port Lincoln) was entrenched with the construction of the Princess Royal Fortress on Mount Adelaide, as a deterrent to invasion.

The fort was continuously manned from 1893 until it was decommissioned in 1956, and now receives more than 25,000 visitors each year for its naval displays, military museums, memorials and the National Anzac Centre.

Albany’s importance as a port declined after the opening of the Fremantle Harbour in 1897, but nevertheless it was used doggedly through the Depression and served as an auxiliary submarine base for the US Navy's 7th Fleet during World War II.

Albany’s natural environment is the main draw card for tourism, which is playing an increasingly important part in the local economy.

Torndirrup National Park is one of the most visited parks in Western Australia, while the nearby sheltered, easily accessible bays and harbours provide the ideal playground for a wide range of recreational activities that include swimming, surfing, kayaking, paddle-boarding, kite-surfing and diving.

With an estimated 200 species of fish inhabiting local waterways, recreational fishing is a popular pastime at scores of locations around Albany.

A combination of consistently fresh winds and wide expanses of obstacle-free water make for excellent sailing in Princess Royal Harbour and King George Sound throughout a season that spans September to June.

As King George Sound is open to the southeast, it provides few locations for safe anchorage in adverse weather coming from that quarter, except for Whalers Beach in the lee of Waterbay Point.

Oyster Harbour and Princess Royal Harbour are far better options in such conditions.

When it‘s blowing from the west, Frenchman Bay offers a good anchorage in front of the historic whaling station and off Goode Beach in depths of 3-15m all the way up to Mistaken Island, which also protects a lee anchorage in northerlies.

Whaling Cove southeast of Possession Point, has anchorage in 3m depth over sand, offering good protection in winds from the south to west.

Whalers Beach, just west of Waterbay Point in Frenchman Bay, provides anchorage over sand in 3m depth with protection in southwest to northwest storms, when swell can wrap around the coast into the Sound, making entry to Princess Royal Harbour and Oyster Harbour hazardous or difficult.

Ledge Beach on the northeast shore of King George Sound is a good day anchorage, in 4m over sand, in northeast to southeast winds, though some swell may enter.

Ellen Cove, off the south end of Middleton Beach, is a good anchorage over a sandy bottom in weather from the southwest.

Inside Oyster Harbour, public courtesy moorings are provided by the Department of Transport (DoT) for short-term use by recreational vessels up to 15m in length.

These are located at the harbour’s northern end about 1.5nm east of the Lower King Bridge, in the southwest between Green Island and Bayonet Point, where there is good protection from winter westerlies, and at the southern end in Johnsons Cove, which is well protected from the summer easterlies.

Anchoring is possible nearly anywhere in Princess Royal Harbour, except near the port’s berthing area and in large areas of shallow water in the west and southeast margins.

Directly west of the town marina, in the lee of the groynes, there is good protection in summer from easterly and northerly winds in 2-4m over sand, but somewhat exposed in winter storms.

There are boat launching ramps at various locations throughout Albany’s waterways – in King George Sound, at Whalers Beach (for small craft only) and Misery Beach, directly east of the old whaling station (closed in bad weather).

They're also found in Oyster Harbour at Emu Point (three-lane concrete ramp with parking, toilets and showers), directly east of the Lower King Bridge, off The Esplanade about 5km south of the bridge, and at a recreation reserve north of the Kalgan River Bridge.

Also try Princess Royal Harbour at Pagoda Point near the sailing club and the Waterfront Marina (two-lane concrete ramp and parking for vehicles and trailers).

Constructed in 2011, the world-class Albany Waterfront Marina is located at the Princess Royal Harbour Foreshore, within easy walking distance to the Albany CBD via a new pedestrian bridge.

The floating pens are accessed by electronic security gates with CCTV surveillance.

The marina is decked in natural timber, with pedestals that provide single-phase power, water and lighting to each individual berth.

A floating pontoon serves small recreational boats and a section of the old timber town jetty has been retained for casual berthing, with single and three-phase power and water.

Other facilities include public toilets/showers, an ablution block with toilets, showers and laundry for DoT penholders, a 2-lane boat ramp, a large public car park with de-rigging bays and a disabled-access fishing platform.

There is also a service jetty for loading/unloading, provisioning, refuelling and maintenance of vessels.

The land-backed concrete wharf allows for close vehicle/vessel interaction, and is equipped with single and three-phase power and sullage pump-out facilities.

The Emu Point Boat Harbour is located in Oyster Harbour, 9km northeast from the city centre.

It contains 50 commercial boat pens, 4 jetties, and a boat ramp, while the pleasure craft section is managed by DoT.

There are also 60 recreational pens operated by the City of Albany, usually for long term use.

All pens are provided with single-phase power, water and lighting.

The marina is approached through a channel marked by leads and lateral markers, with minimum depth 1.9 m below chart datum.

A concrete service jetty is available for short-term loading/unloading, provisioning and refuelling, with single and three-phase power, water, lighting and a waste oil disposal facility.

The jetty may be used for emergency berthing, but longer term berthage must be allocated by the DoT Regional Office.

Formed in 1909, the PRSC is the only sailing club in the Albany area, offering a wide range of activities, including beginner classes in dinghies, leisurely squadron cruising, racing regattas and guided fishing safaris.

The club has a marina with pen moorings of various sizes, a slipway, a hardstand area and boat sheds for secure, undercover storage of dinghies, kayaks and other small watercraft.

There is a floating pontoon over relatively shallow water, and docking here should only be attempted close to high tide by vessels with a draft less than 1.5m.

A public carpark provides access to a boat launching ramp south of the club.

The natural harbours and waterways around Albany have always been a focus for the city’s evolution from the state’s oldest settlement to a major trading port supporting local industry.

While its relative importance as a commercial facility has been overshadowed somewhat by the Port of Fremantle, Albany remains a very attractive destination for a host of recreational activities, both on land and sea.

Simply put, there is no more beautiful sight on Western Australia’s southern coast than the panorama of King George Sound stretching away to the ocean’s far horizon.

Department of Biodiversity, Conservation and Attractions